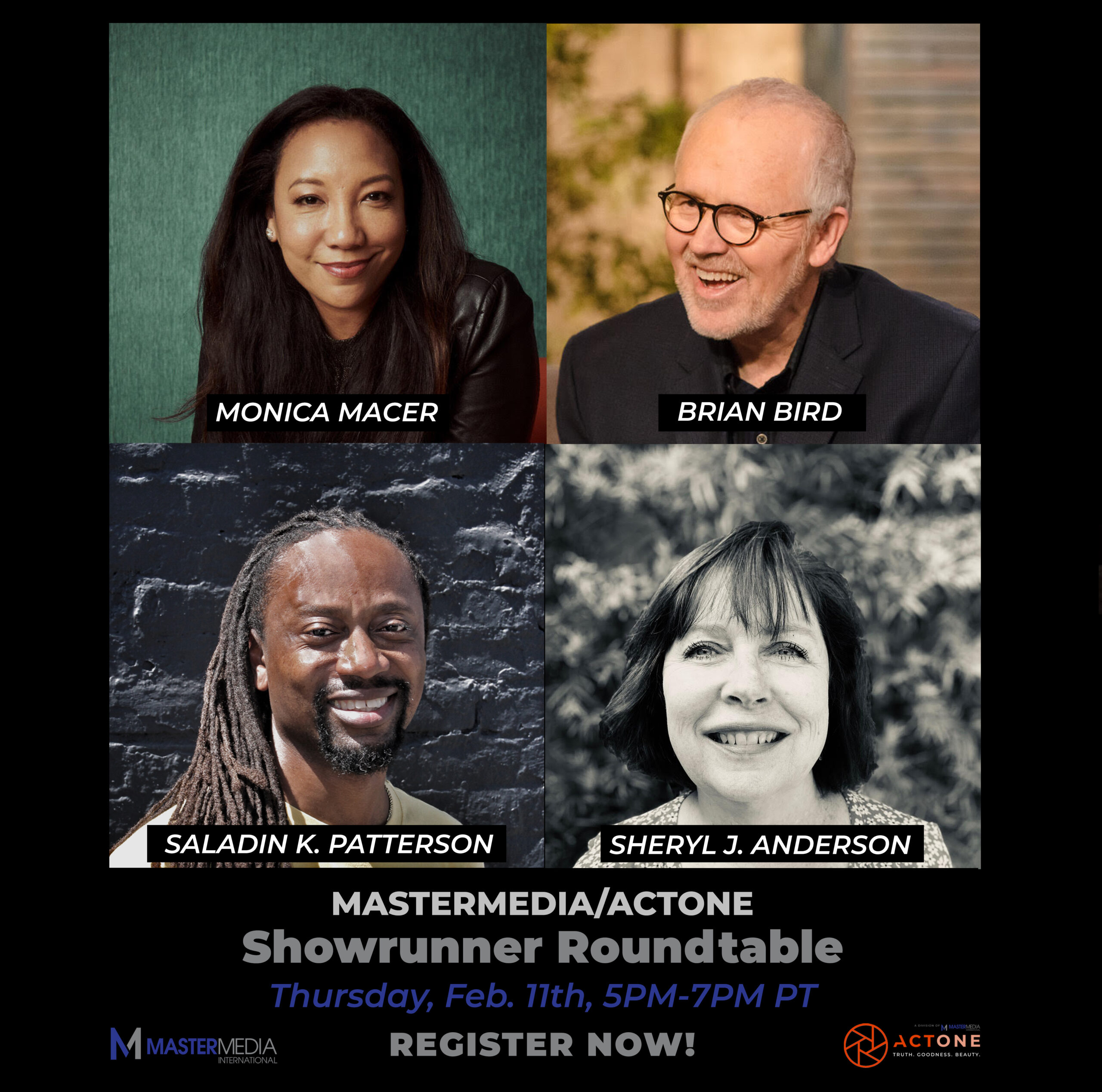 Take a peek “behind the curtain” of television production as you hear industry professionals break down what it means to be a showrunner. From sharing the lessons they’ve learned from the writer’s room, to navigating their careers as Christians, this is a special episode you won’t want to miss!

MONICA MACER is a screenwriter, executive producer, and showrunner of Korean and African American descent. She has written for some of the most acclaimed television series over the last 15 years, including LOST (ABC), PRISON BREAK (FOX), NASHVILLE (ABC), QUEEN SUGAR (OWN) and GENTEFIED (Netflix). Most recently, Monica proudly served as showrunner and executive producer for MACGYVER (CBS). As showrunner of Queen Sugar’s second season, Macer was tapped as one of Variety’s 10 Writers to Watch.

Macer is married to actor/filmmaker, Sterling Macer Jr., and she’s the proud mother of a thirteen-year-old daughter.

BRIAN BIRD is co-creator and executive producer of the top-rated Hallmark Channel series WHEN CALLS THE HEART, in partnership with Michael Landon, Jr., which premieres its eighth season in February 2021. He has written and/or produced two dozen films, including THE HEART OF MAN, THE CASE FOR CHRIST, CAPTIVE, NOT EASILY BROKEN, THE ULTIMATE LIFE and BOPHA! and nearly 350 episodes of network television, including TOUCHED BY AN ANGEL, STEP BY STEP and EVENING SHADE. He is currently developing four new films, NORTHERN LIGHTS, LIFE AFTER HEAVEN, The STORY OF EVERYTHING, and THE MONARCH. His most important production to date is his 40-year marriage to wife Patty and their five children.

SHERYL J. ANDERSON is the showrunner and an executive producer of SWEET MAGNOLIAS (Netflix). She began her writing journey as a playwriting major at The College of William & Mary in Virginia. Sheryl has worked as a television studio executive, screenwriter, and half-hour writer (PARKER LEWIS CAN’T LOSE, DAVE’S WORLD). She then moved to the hour world, writing for a wide range of series (CHARMED, FLASH GORDON, WHEN CALLS THE HEART), and selling pilots to Disney, SyFy, NBC, and Lifetime. She created UPtv’s first dramatic series, TIES THAT BIND, and has written movies for Lifetime, Hallmark, and UPtv. Sheryl also teaches and mentors through a variety of organizations and universities. She and her children are members of Mount Olive Lutheran Church in Santa Monica.

SALADIN K. PATTERSON is currently the showrunner of the new show, THE WONDER YEARS on ABC. Also he is an Executive Producer of the FX comedy series DAVE. Prior to that, he was the showrunner of the TBS series THE LAST O.G., and the showrunner of the TBS animated series, THE COPS. Some of his other credits include THE BIG BANG THEORY, TWO AND A HALF MEN, PSYCH, THE BERNIE MAC SHOW, and FRASIER. Patterson is a native of Montgomery Alabama and he is an M.I.T. alumnus with a degree in Electrical Engineering. He now resides in Los Angeles, California with his wife, Chelsea, his daughter Micah and son, Joshua.